Ahoy matey! Learn how to dress like a pirate and speak like one. Some pirate costumes is all you need to get into the character. Here's everything you need to know. Avast Ye! 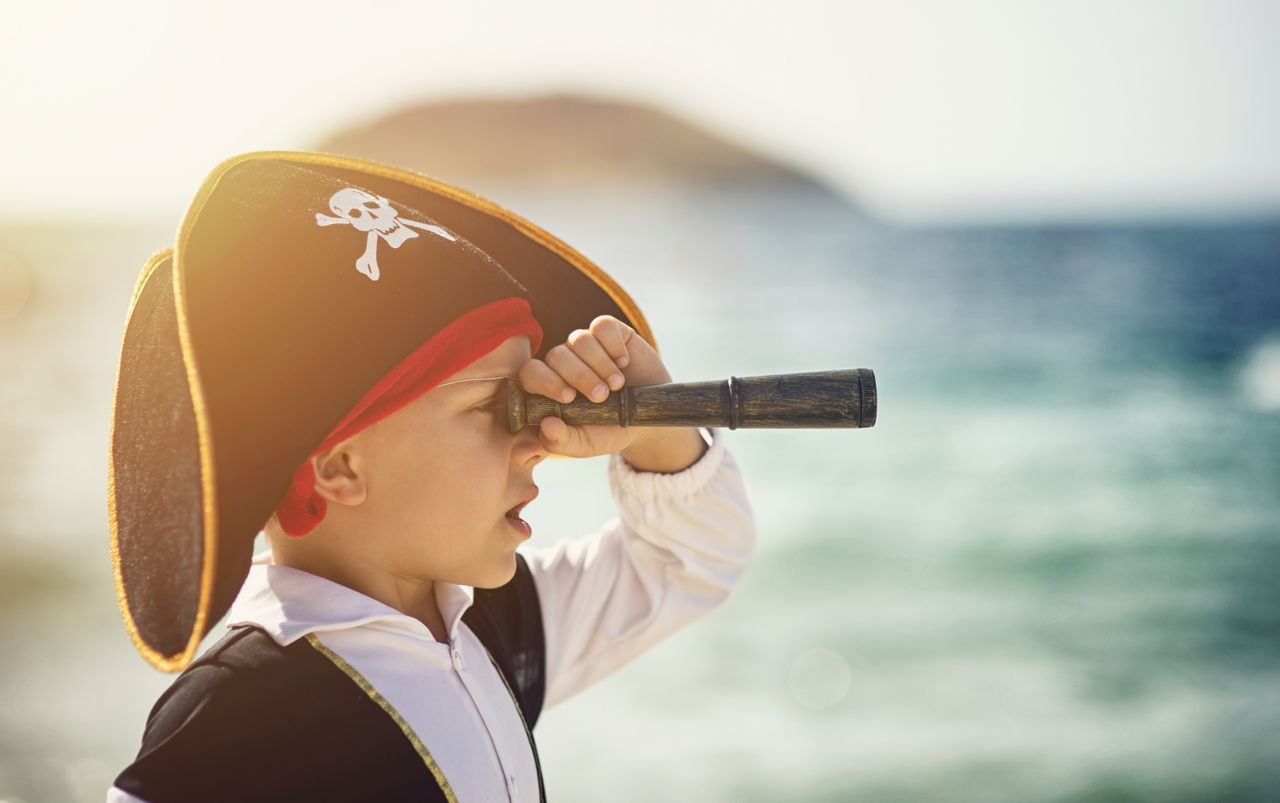 Ahoy matey! Learn how to dress like a pirate and speak like one. Some pirate costumes is all you need to get into the character. Here’s everything you need to know. Avast Ye!

To err is human; to arr is pirate! Time to shove away those cowboy costumes, and make Captain Jack Sparrow your muse for the theme party next week! A bold personality, tinge of kohl in eyes, a perfectly done pirate attire, and a li’l bit of accent… ahoy! Masculinity is oozing out from every bit of you. Now, whenever you see Johnny Depp in Pirates of the Caribbean series, you find his attire a bit befuddling. There’s a baggy shirt, a sleeveless jacket (which actually is not a jacket!), some intricate hair-braiding, pants, and boots! Is that it? Yes, mates! Learning how to dress like a pirate is not at all difficult. Acting like a pirate can be daunting. Erm, we’ll talk about it later in this write-up. For now, let’s unleash the exact clothing items you need to become a pirate. Boogie down!

Here’s t’ t’ spirit o’ t’ pirates! Dressing like a pirate for a party could never be so easy. I’ll tell you how. All you need is a white baggy shirt, a pirate vest, regular pants (please do not pick up denims for God’s sake!), knee-high boots, pirate hat, fake mustache, pirate wig (preferably long, curly hair), fake braids, and a pirate sword.

Tadaa! Let’s get started! Now you’ll find everything mentioned above at a costume shop. However, even if you do not find them, your wardrobe has it all. They’re very basic as you can see. First things first, wear that baggy off-white shirt. Remember, the shirt you pick should be a large size, and loose enough. Leave the cuffs unbuttoned, and tuck the shirt into your pants. Secondly, now pants, if they are skinny, would look oh-so-pirate! You need not pick up special pants, as even normal pants would serve the purpose. However, they should be a darker shade of brown or black.

Thirdly, pick up a dark red or black colored pirate vest to don over the shirt. That shouldn’t be too baggy, and should go well with your torso. Pirates are masculine, and anything gone wrong may trash the entire purpose of dressing like a pirate. Leave the vest unbuttoned, and make it look ruff-and-tuff! Fourthly, get a pair of boots that are not too lacy. Knee-high boots, black or brown in color, are the best pick. Don’t forget to tuck your pants into the boots. That’s the way pirates dress, after all!

Fifthly, accessorize! A pirate hat is available only on costume shops. So, you’d have to pick one from there. The best thing about picking up a pirate hat from costume shops is that, hat is one of the most striking features of a pirate costume, and the better designed it is, the more attention-grabbing it becomes. Along with the hat, a scarf is what you need. Pirates usually tie a scarf across their forehead. If you wish, you too can tie one, and wear a hat over it. However, another scarf can be tied across your waist. It’ll give you a perfect pirate feel! Choose a scarf color that goes along with your boots. It’ll complete your pirate costume. Chart out a pirate treasure map and carry it along with you. Oh my, that’s what I call a perfect pirate costume!

Lastly, some jewelry that goes with your attire can do wonders to your looks. Wear some skull-shaped rings, bracelets, or necklaces, or even stud earrings! A pair of good ring-shaped earrings is a good pick too. However, you need to feel comfy wearing it! Some pirates have long hair, and you can do the same. Use a pirate wig, and add fake braids to it. Some beading is all you need. Wear the pirate hat in a way that it shows your braids. If not a hat, what better than a bandana? Tie a red bandana over your head, and let those fake strands of hair fall. Also, adornments such as a pirate ship tattoo, fake teeth, mustache, too much kohl into the eyes, makeup like that of a pirate will definitely complement your overall attire. What’s more, carry that sword along, or tuck it somewhere in your pants. Let it show, that would give all the feel of standing with a pirate!

Now, let’s finally learn how to talk like a pirate. Okay, you cannot speak exactly like a pirate in a day. So, it’s better to learn just the basics of speaking in this dialect, and it’s extremely easy. The following phrases are funny, and easy for you to learn. You can talk in your native language, but can incorporate the following in your conversation to give all that pirate-ish feel:

Above were some commonly used phrases when one talks like a pirate. However, you can easily check out how pirates talk by watching some pirate-themed movies. A day spent well around the world of pirates can help you get a load of their accent, vocabulary, and dialect. That’s not too difficult, or is it?

So, grab all the essentials, start practicing, and you could be a successful substitute to Captain Jack Sparrow for the girls to drool over! All hands hoay!