Bayberry candle is a greenish, strong scented candle illuminating millions of houses since forever. Lighting these candles on Christmas or New Year's Eve is a widely celebrated tradition. CelebrationJoy walks you through some information about the origin of the Bayberry tradition, its legend and this marvelous tradition. 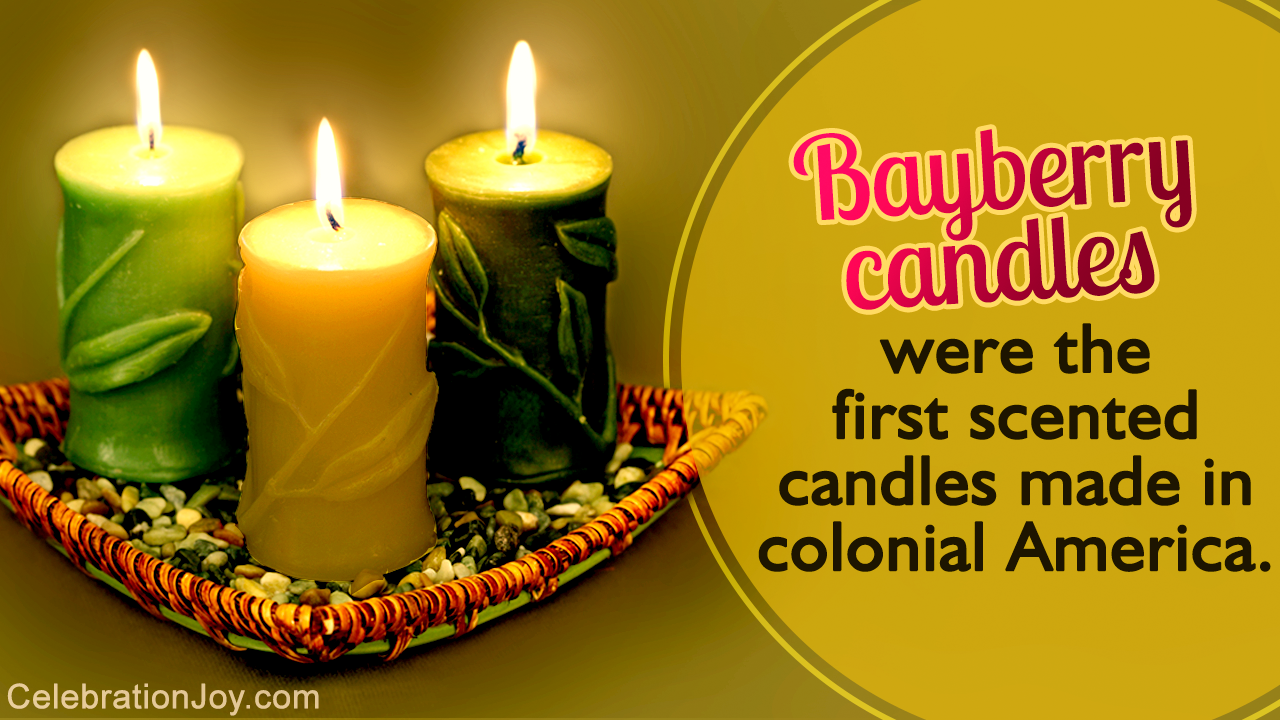 Bayberry candle is a greenish, strong scented candle illuminating millions of houses since forever. Lighting these candles on Christmas or New Year’s Eve is a widely celebrated tradition. CelebrationJoy walks you through some information about the origin of the Bayberry tradition, its legend and this marvelous tradition.

Invite your friends to the holiday ritual by gifting them these beautiful bayberry candles, and establishing a close relationship with them.

Lighting and gifting bayberry candles in the Yule time is a centuries-old tradition. They say, it creates a closer bond and improves partnership. Some also believe that burning these candles in homes would attract wealth and prosperity.

The real bayberry wax candles are slightly bitter and leave an unpleasant, woodsy odor. Adding aromatic scents eliminates this odor, and are widely used in the holiday season. Bayberry scent in a candle is obtained by adding a bayberry fragrance or essential oil to the popular wax types such as beeswax, paraffin and soy. Mrs. Mabel Baker, a Cape Cod woman, was the first to make hand-dipped bayberry candles from wild bayberries. She observed a tradition of gifting these candles on the occasion of Christmas to family and friends.

It’s beginning to smell a lot like Christmas! But do you know the origin of this tradition? CelebrationJoy invites you to read further to know about the Legend of Bayberry candle.

Legend has it that bayberry candles were made in the eastern coast of America which were the first scented candles ever made. The settlers there realized there was a scarcity of supplies which included even candles. To keep their homes illuminated, they had to collect tallow, which was animal fat obtained by slaughtering animals, to make candles out of it. This tallow gave out foul odor. On an average, 300 – 400 candles were required in a year, thus, making these candles in bulk would be a grueling task for the inhabitants.

Soon the colonists came up with the idea of making candles with bayberry. Bayberry is a shrub found widely in the Atlantic coast. This bush has a berry-like fruit that produces a greenish-white-colored waxlike substance. Gradually, they learned to make candles out of it by gathering bayberry bushels and boiling them for hours. The wax would float on the surface of water due to its buoyancy. The aromatic odor and acrid taste of the bayberries was far better than that of the tallow. Also, these tapers lasted longer.

But the nature of pure bayberry is highly brittle, thus, making it difficult to mold and to retain the shape of the candle. Hence, beeswax was added to the bayberry wax which helped mold and give stability to the candle. They also illuminated the area with a clean flame. This gave rise to a norm that burning bayberry tapers ushered in good luck and happiness in their homes.

The colonists cherished the bayberry candles. The production of bayberry wax was a tedious process. Besides, for one pound of wax almost 9 pounds of the berries were required. So this became an item of luxury, and hence, was kept for special occasions only. Owing to its scarcity and value, the tradition of burning these candles were restricted to the darkest times of the year, winter to be precise. Over the years, lighting these candles became a holiday tradition!

Thus, there’s this ritual to light bayberry candles on the night before Christmas as well as on the New Year’s Eve which is left as is until it burns out on its own.

It is believed that letting these candles burn to the core would make for an abundant life filled with joy.

Lighting of these candles is accompanied with reciting of the legendary poems. Family, friends, and other close relations sing them aloud, welcoming the holiday season. Some of the popular versions of this poem are given below.

Verse 2:
Here’s a Bayberry Candle that’s meant just for you,
With Holiday Tradition that’s tried and true.
When you light this candle on Christmas Eve Day,
Love and Luck come to you when it’s burned all the way!

Verse 3:
To bring good luck for a year,
you must burn a Bayberry Candle on Christmas Day.
And if the flame burns bright, and the light shines clear,
then heaven will bless you all the year.

So keep the tradition alive by illuminating your houses with these elegant tapers. Here’s hoping it will fill your lives with its aromatic scent.