Why Do People Wear Masks During Mardi Gras? Explore the Reasons

It doesn't matter if you look like an enticing porcelain doll, an evil jester, or a proud feathered peacock. After all, you are parading on the streets just for a day, binging on the big feast before the fast and hiding behind a mask! CelebrationJoy uncovers the history and reason why people wear masks during Mardi Gras.

Home / Uncategorized / Why Do People Wear Masks During Mardi Gras? Explore the Reasons 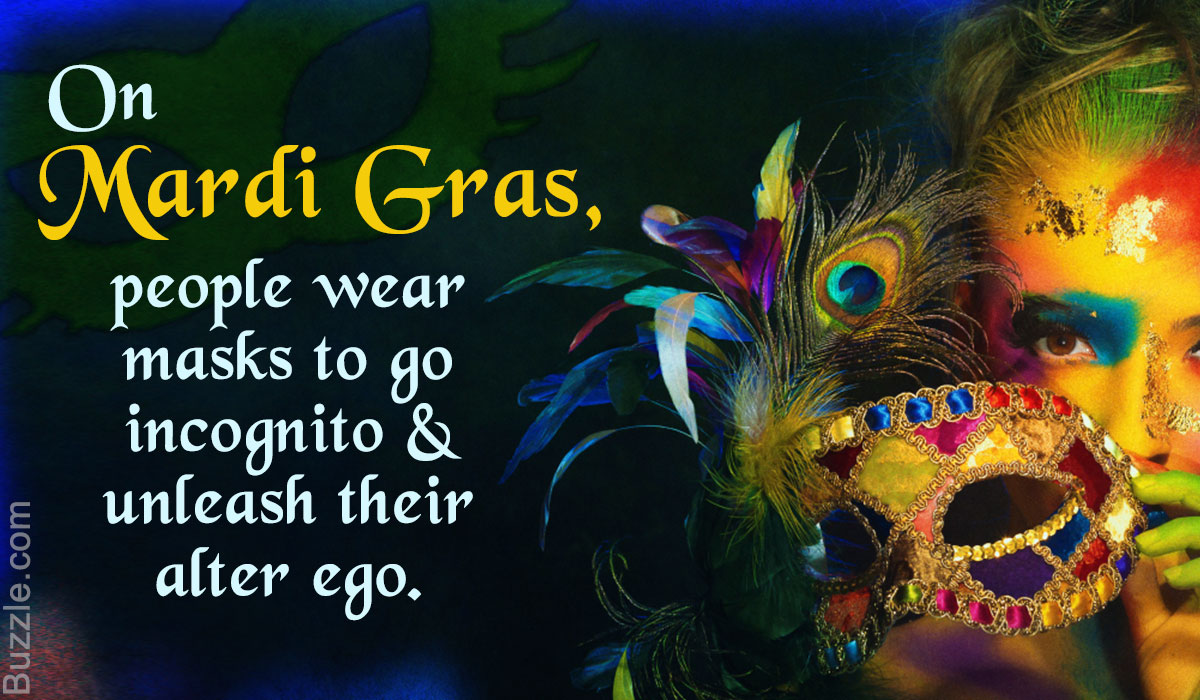 It doesn’t matter if you look like an enticing porcelain doll, an evil jester, or a proud feathered peacock. After all, you are parading on the streets just for a day, binging on the big feast before the fast and hiding behind a mask! CelebrationJoy uncovers the history and reason why people wear masks during Mardi Gras.

1. It’s illegal to mount on a parade float without a mask on Mardi Gras.
2. Continuing wearing masks on Ash Wednesday is regarded a rude gesture and a sign of mockery of the Lenten season.

Mardi Gras is derived from the French term ‘Fat Tuesday’ which is also known as ‘Shrove Tuesday’ and falls on a Tuesday before Ash Wednesday. Ash Wednesday ushers in the Lenten season of 40 days of fasting and penance. Hence in order to have a final feast before getting into the pious weeks of lent, the celebrations at Mardi Gras are so indulgent.

It is believed to have originated from a pagan tradition of parading a fat ox with much festivity, gaiety, and people indulging in binge eating and drinking. Another legend states that Mardi Gras originated from the ancient pagan celebrations of spring and fertility, known as Saturnalia and Lupercalia. It is also a well-known fact that the Catholic church discourages sexual behavior and consumption of meat during lent, hence people unleash their overt behavior for a day during the festivity. This celebration was recognized and included in the annual Gregorian calendar during the year 1582 by Pope Gregory XIII.

It is celebrated widely in major cities of the world including New Orleans which is termed as the Mardi Gras capital of the United States where traditional parades, masquerade balls, and lunacy of food and alcohol prevails throughout the day. The most dominant feature of the festivity includes donning a mask which not only conceals the identity of the wearer but also allows a person to behave in way that is socially outrageous. Let’s find out why is it so important to wear a mask?

● In many ancient cultures and beliefs, masks were regarded as an object of ritual and magic that transported the wearer to an outwardly spiritual realm. The African tribes wore masks during religious rituals to feel connected to the divine. Many of the tribes consider it as a lineage and status symbol, it is often regarded as a crime to identify the wearer of the mask in these cultures.

● Legends abounded that Satan visited the Mardi Gras carnival to impregnate innocent young women, and hence the practice of wearing masks began to conceal one’s identity and to trick the Satan. Mass disappearances during the carnival were rumored but never proved. These superstitions and legends stand fictive in today’s society and the actual history is totally different.

● The practice of disguising one’s true identity behind a mask dates back to the European celebration of the carnival interlaced with customs of pagan Rome. Mardi Gras masks bestow an air of enigma and conjuration to the revelry. During the merriment, the societal anticipations are debarred and one can follow unrestrained activities.

● Mardi Gras spread from Rome to Europe and later to the United States through the French settlers. During the 17th century, French explorer Pierre Le Moyne d’Iberville set up camp 60 miles from New Orleans calling it Point du Mardi Gras. Thus a tradition of lavish parties, parades, and masked balls began. When the Spanish governor took control of the area in 1766, he outlawed the outrageous celebrations due to the immorality associated with the celebrations. Later in 1823, the Creole population won over the governor to license masked balls.

● By 1827, wearing a mask on the streets of New Orleans was legalized, jubilation’s erupted on the streets by a group of students who donned masks and dressed up in jester costumes to stage their own Fat Tuesday merriment. This risque festival received favor among the party goers, and in 1833 Bernard Xavier de Marigny de Mandeville, a wealthy plantation owner generated funds for an official Mardi Gras solemnization. Rowdiness prevailed during the 1850s, to curb the violent behavior by revelers a secret society of the elite called the Mistick Krewe of Comus arranged the first well-planned Mardi Gras parade in 1857.

● Mobile existed as a French colony established by Jean Baptiste LeMoyne, Sieur d’Bienville, in 1702. The first parade originated here during the 1703. Soon the political control of Mobile shifted from the French to the British, with this the French colonists began to create secret societies or the ‘mystic societies.’ The Cowbellion de Rakin Society was formed during 1830, as these societies spread over to New Orleans. The first ‘modern’ Mardi Gras festivity took place in 1835. The Mobile-style of carnival through the 1840s and 1850s was raucous and wild so much so that the city government wanted to get rid of this public celebration. During this time Joseph Ellison, a businessman from Mobile, and former member of the Cowbellion de Rakin Society, along with five colleagues formed the Mistick Krewe of Comus and organized the first well-known parade themed ‘The Demon Actors in Milton’s Paradise Lost,’ along with a munificent ball which continues as tradition even today.

● The origin of wearing masks during Mardi Gras traditionally began with these elite and secret societies known as ‘krewes’. Masks were donned during the parades in order to hide the individuality of the members, removing one’s mask while on a float is strictly considered as bases for being fired from the krewe especially the Zulu and Endymion krewes. The reason behind the secrecy of the krewe members during the Mardi Gras parades is rather politically and racially agitated.

Each krewe selects a new theme each year, which intentionally pokes fun at racial, social, and political issues or events. During the former days of Mardi Gras the black community, such as servants and slaves, subtly attacked the grandiloquent white community which was prevalent with exaggerated stereotypes. The nameless atmosphere provided by the masks kept the black krewe members secure as well as passed on their jibes in a festive way.

● This kind of political satire exists even today performed by the modern-day krewe members, Mardi Gras masks enable the krewes to participate in social mockery which at times are shocking. In 2006, Mardi Gras parades in New Orleans were predominant about Hurricane Katrina and its calamitous backwash, contempt against the U.S. Army Corps of Engineers for the neglected levee system that caused the annihilating flooding, and mockery of FEMA and the federal government for the bungled treatment of this large-scale disaster.

● For the secret societies, Mardi Gras also serves as a debutante ball to formally introduce their daughters and granddaughters to the society.

● The secretiveness and enigma symbolized by the Mardi Gras masks was disputed when the city council of New Orleans passed an ordinance in 1991 that made the krewes compulsory to reveal their membership rolls in order to qualify for licenses and permits to organize their parades and masquerade balls. Several krewes, including the original Krewe of Comus rejected to parade for several years, arguing that this necessity disputed the customs of the secret societies and illusion so important to Mardi Gras. Finally these krewes relented with the authorities and the ordinance in order to continue the traditions of the festivities.

● The wearing of masks took to streets with the overzealous and merry crowds, anthropologists view this mass behavior as means to shake off stringent rules of decorum and loosen one’s inhibitions to project the negative side of one’s personality. These carnival masks also symbolize the ritualistic amalgamating of socio-economic strata, the ability to display aberrant behavior without vengeance and the theatrical celebration of controversial themes.

● The now-familiar masks worn on Mardi Gras mimic versions that have been prevalent from centuries. The Bauta, Columbina, the Moretta, the feathered, sequined, and glittering camouflages are originally colored in the carnival colors of purple which symbolizes justice, green symbolizes faith and gold symbolizes power.

● The New Orleans festivities have been subjected to cancellation about a dozen times. Mostly during the Civil War, World War I, World War II, and during the yellow fever outbreak. But the revelry associated with this festivity continues to grow in popularity.

As author James R. Creecy aptly describes the lunacy of the masquerading crowd in his book Scenes in the South, and Other Miscellaneous Pieces, 1860:

Shrove Tuesday is a day to be remembered by strangers in New Orleans, for that is the day for fun, frolic, and comic masquerading. All the mischief of the city is alive and wide awake in active operation. Men and boys, women and girls, bond and free, white and black, yellow and brown, exert themselves to invent and appear in grotesque, quizzical, diabolic, horrible, strange masks, and disguises. Human bodies are seen with heads of beasts and birds, beasts and birds with human heads; demi-beasts, demi-fishes, snakes’ heads and bodies with arms of apes; man-bats from the moon; mermaids; satyrs, beggars, monks, and robbers parade and march on foot, on horseback, in wagons, carts, coaches, cars, &c., in rich confusion, up and down the streets, wildly shouting, singing, laughing, drumming, fiddling, fifeing, and all throwing flour broadcast as they wend their reckless way.

A mask is a satire in itself, cover your face with one and you immediately metamorphose into someone else while being under a poker-faced frosty guise. It’s the reflection of one’s soul and conflicting identity.