The Most Insane and Bizarre Festivals Around the World

Speak of eating, drinking, and indulging, and all that comes to mind are festivals. Festivals bring in gaiety, a vivid splash of color, and lots of merriment. Well, these mentioned below, top the list for giving you just that, an experience of a lifetime.

Home / Uncategorized / The Most Insane and Bizarre Festivals Around the World 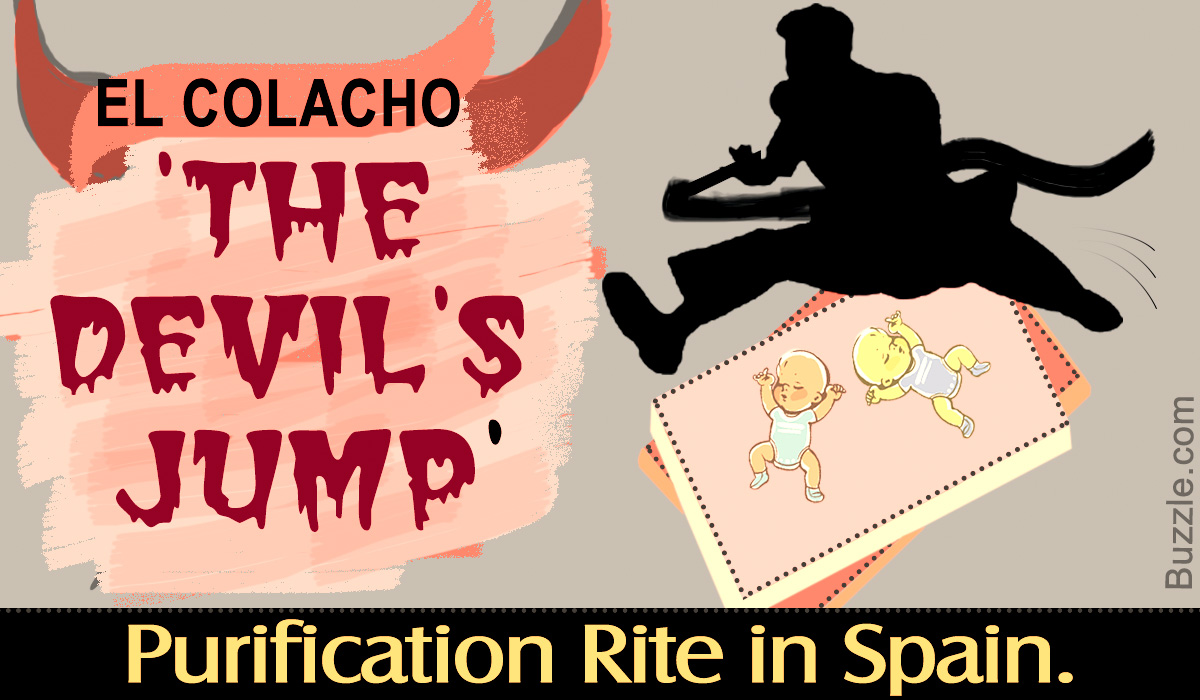 Speak of eating, drinking, and indulging, and all that comes to mind are festivals. Festivals bring in gaiety, a vivid splash of color, and lots of merriment. Well, these mentioned below, top the list for giving you just that, an experience of a lifetime.

Are you game for some out-of-this-world experience? Head to these places and participate in their amazingly-weird celebrations. These festivals are known for being notorious and flamboyant, and hence have been termed as the most insane of them all. Head to Australia’s Port Lincoln and participate in the tuna toss or have a ball rolling your cheese downhill in England. Well, the options are many and you can entertain yourself in any one of these places.

There are those who love playing with fire, while there are some who like the sound of music. There are festivals that cater to the ones who want to simply have fun, while for some a festival is the means to indulge in sheer excess. There are also such festivals that provide you with the rush and a near-death experience. Well, if you are game for any of these, there are many more festivals designed to satiate every whim and fancy. Must we say, these festivals are definitely not for the faint-hearted.

Speaking of insane, the festival that tops the list is Spain’s, ‘El Colacho’. Nicknamed as ‘The Devil’s Jump’, the bizarre celebration, in which ‘the devil’ jumps over a mattress full of newborns, is a part of the Catholic feast of Corpus Christi, that falls anytime between May and June. 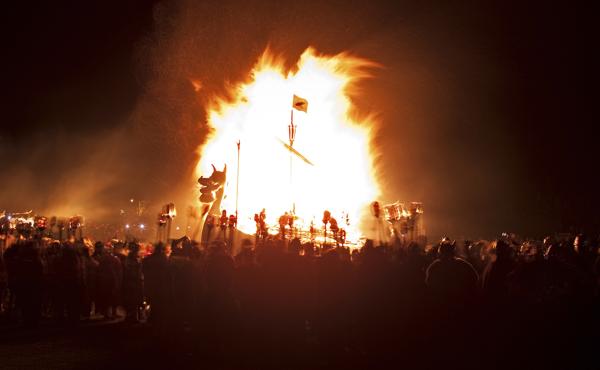 Where: Shetland, Scotland
When: Last Tuesday of January
Why: It is a festival to mark the end of the yule season. People dress up as Viking warriors and carry out tar-barrel processions, which culminates in burning a replica viking ship. There’s lots of drinking, mischief-making, and yes, tons of fire. I bet this is one hot place to be. 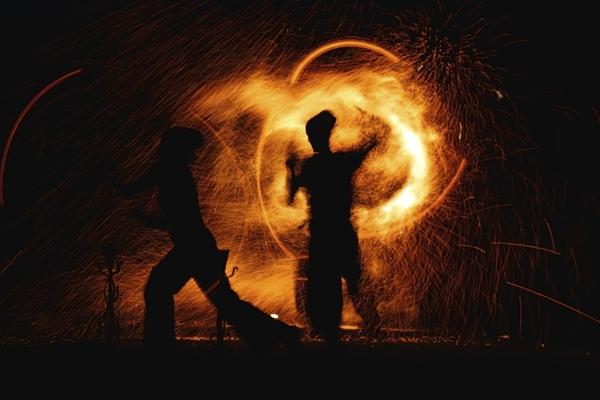 Where: Nejapa, San Salvador
When: August 31st
Why: Supposedly a festival celebrating a fight between good and evil, the fireball fight carried out in Nejapa is one jaw-popping event. Imagine a ball of fire hitting you right on the face! Okay, this is insane and playing with danger, however, it is supposedly conducted under vigilance. 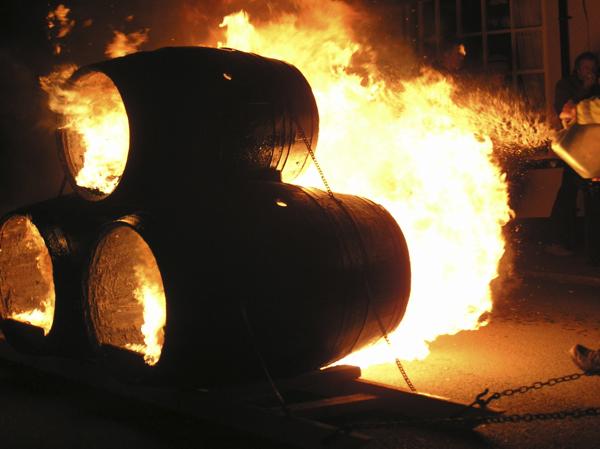 Where: Great Britain
When: November 5th
Why: Known to be a Thanksgiving Act to celebrate the failure of the Gunpowder plot of 1605, Londoners commemorate the day by burning tar barrels. It doesn’t stop here though, what follows is a parade through the town carrying these burning barrels. Yes, you heard right. You got to balance these barrels on your shoulder (actually your head), till your strength wears out and then pass it on to a fellow Guiser. The celebration culminates in burning an effigy of Guy Fawkes. Quite an eventful evening. 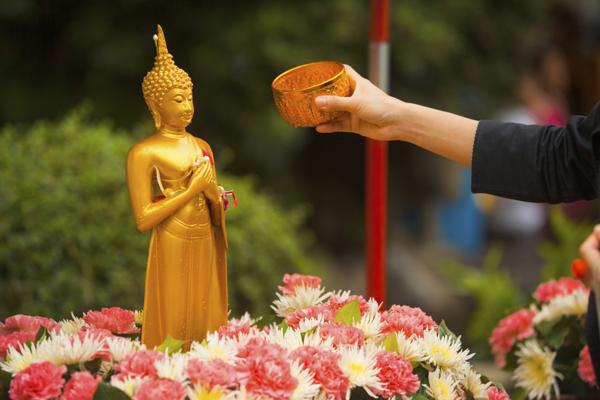 Where: Thailand
When: April 13th -15th
Why: New year in Thailand can’t be any cooler. The Thai new year, which falls in the hottest time of the year in Thailand, is apparently celebrated sprinkling/splashing water on one another. There is a crazy water fight that takes place, and you better be armed with your own water gun to be safe. Well, it’s the Thai way of wishing people good luck. 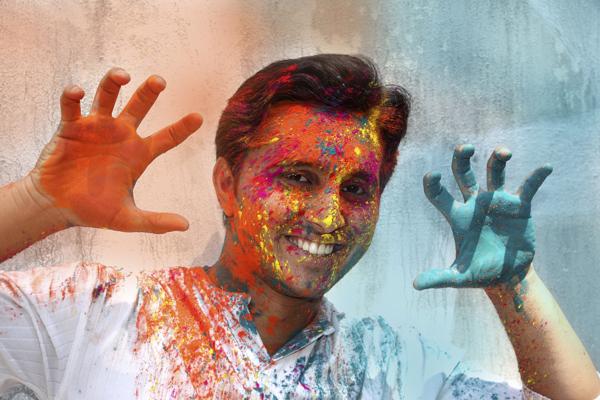 Where: India
When: The next day of a full moon night in early Spring
Why: The festival primarily ushers in the colors and life of spring, while bidding goodbye to the dull winter. The celebrations begin with a bonfire night and culminate by throwing colored powder on each other. Apart from that, you can indulge in some wild fun which includes drinking and enjoying ‘laced’ sweets. 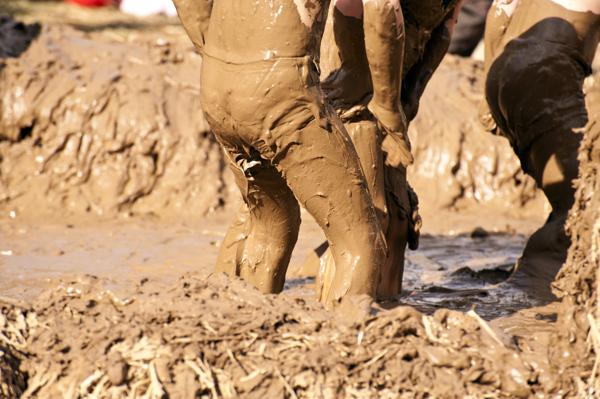 Where: Boryeong, South Korea
When: Second weekend of July
Why: Considered to be rich in minerals, the mud flats from Boryeong are used to manufacture cosmetics. Believe it or not, this festival started as a means to promote nothing but ‘cosmetics’. Held in summer, this mud fight is as notorious as it sounds. You can indulge in mud wrestling, mud sliding and the list goes on.

Battle of the Oranges 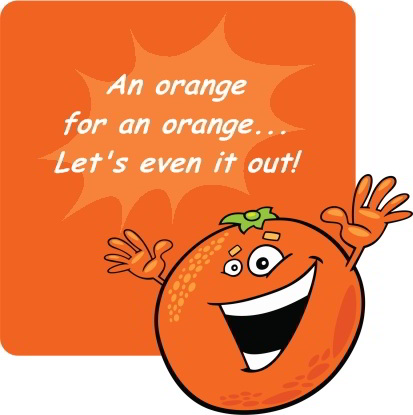 Where: Ivrea, Italy
When: Weekend before Ash Wednesday
Why: You wear orange costumes, hit each other with oranges, and you have fun. The Battle of Oranges is considered as the largest food fight in Italy. The origin of the tradition, however, is a little gross. It is said that a tyrant tried to humiliate a young girl on her wedding day, and instead, is decapitated by the brave girl. Every year, a young girl plays the part of Violetta, and the oranges are considered the removed testicles of the tyrant. 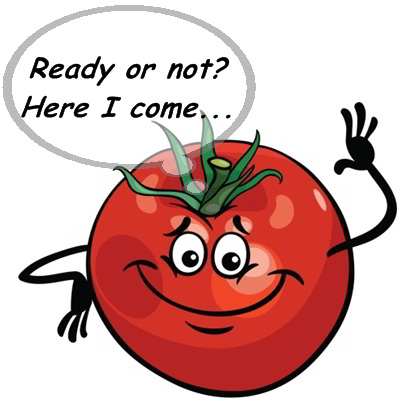 Where: Buñol, Spain
When: Last Wednesday of August
Why: You can call it a street fight, a food fight, or simply a splash fight. But the Tomatina is one helluva festival. It sure calls for some messy fun. Guess what, it doesn’t end at that; you also have a rain dance to soak yourself in (as if the tomatoes weren’t enough!). 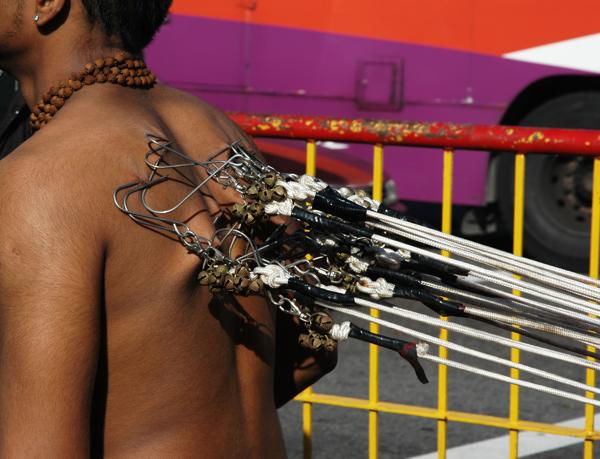 Where: Palani, South India, also in Malaysia, Singapore, Myanmar
When: Full moon night of January/February
Why: Can you pull a tractor with hooks attached to your skin? This festival, celebrated among the Tamils in South India, involves a show of endurance and dedication to Lord Murugan. The level of pain that one can endure is symbolic of the amount of blessing the person is going to receive. Talk of ‘no pain no gain’, and this one sure tops the list. 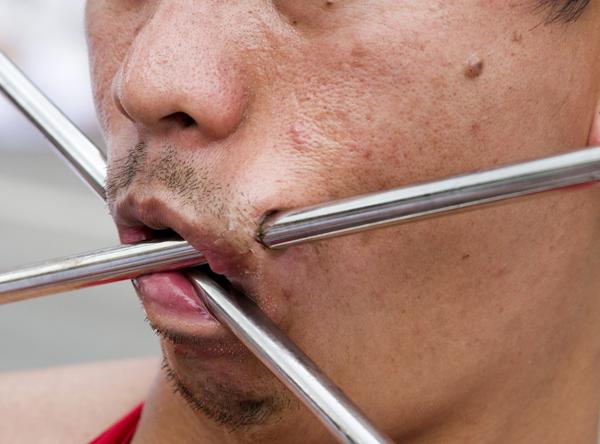 Where: Phuket, Thailand
When: October
Why: The festival is all about invoking the Gods. There’s fire walking, body piercing, and many other self-scarring acts done to appease the Gods. Abstinence can sure be painful; need more proof? 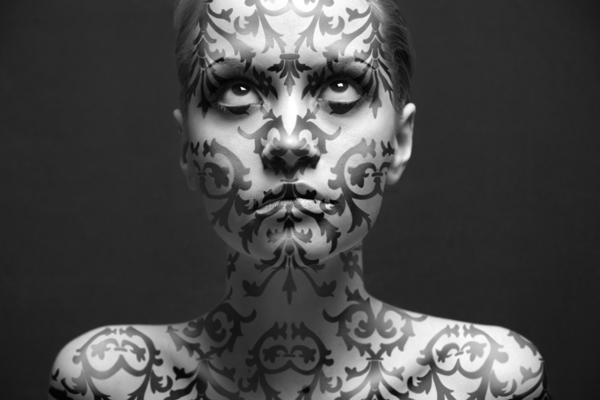 Where: Pörtschach, Austria
When: July 1st – 7th
Why: It’s a world championship more than a mere festival. It’s one day when you can pose as a model for body art. bning over a week, this festival makes sure you get your technique right before indulging in the art itself. You want a transformation? Head to the Mecca of body painting. 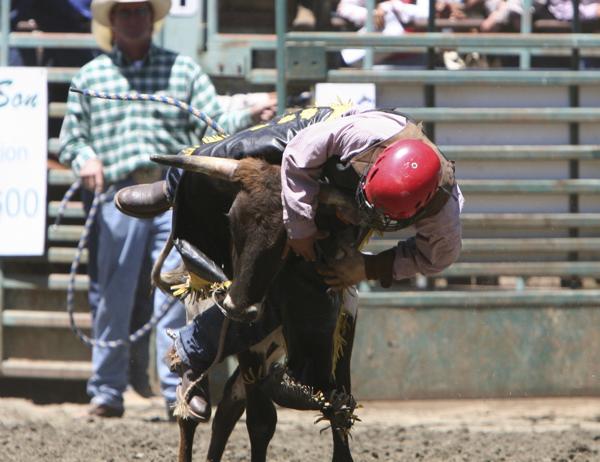 Where: Calgary, Alberta, Canada
When: 1st and 2nd weekend of July
Why: If you wish to awaken the rodeo in you, head to Calgary in July. Why? Because it’s one place where you can not only enjoy the rodeo championship, but also join the cowboy party that the city boasts of. There’s drinking, merrymaking, and cowboy-ing. 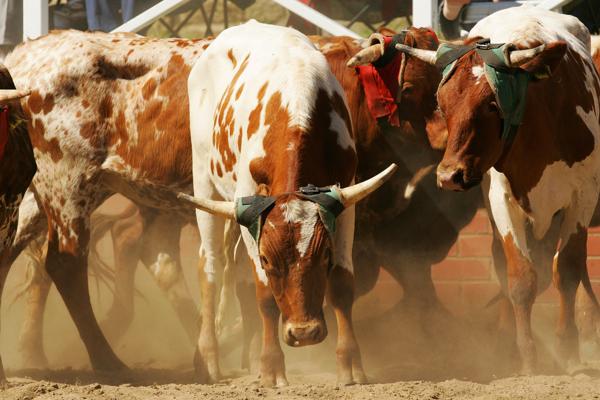 Where: Pamplona, Spain
When: July 6th
Why: Spain is the place you should be, if you want to have an adrenaline rush. The Pamplona bull race, which is a part of the San Fermin Festival that is held in July, boasts of day-long parties all prepped up with thrill. Imagine running before raging bulls; run, I say, to save yourself, and have an experience of a lifetime. 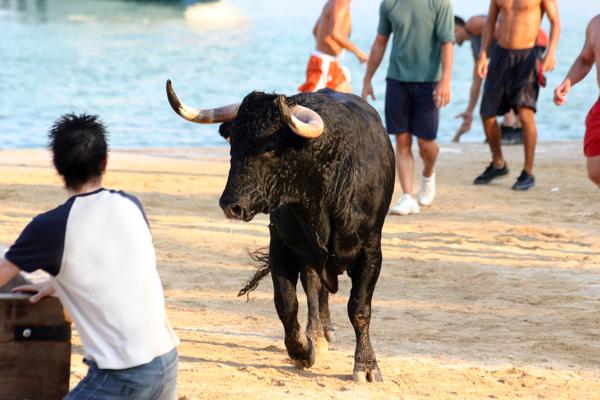 Where: Dénia, Spain
When: July 7th
Why: It’s a race again and this time you have to lead the bulls to the sea. This is eventually the last event of a week-long festival, held to celebrate the Feast of the Sacred Body and Blood of Jesus Christ. 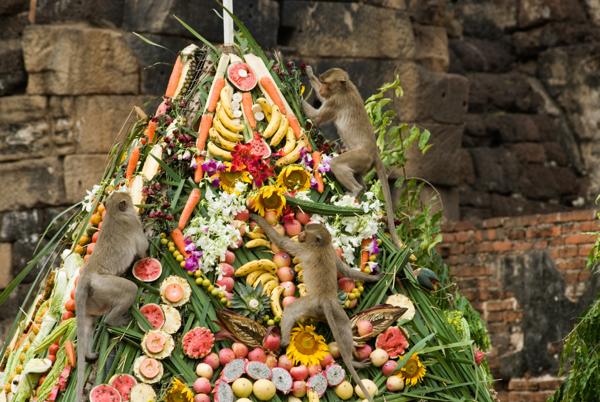 Where: Thailand
When: November 25th
Why: Feed the monkeys and earn yourself good fortune. Plus you can dress up like a monkey and partake in music and dance. No monkey business here, it’s a tradition held to promote tourism, what else? 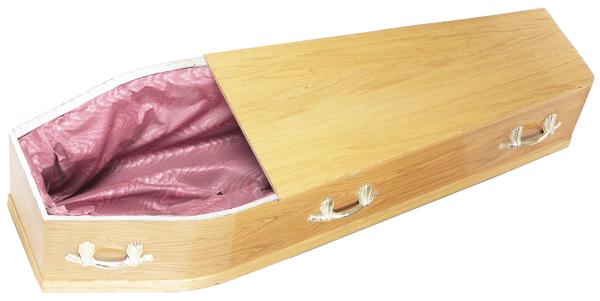 Where: Nieves, Spain
When: July 29th
Why: Have you had a near-death experience in the past year? If yes, then you should be a part of the Resurrection Festival held in Spain. You get the privilege of lying in the coffin while many others carry the coffin in a procession. 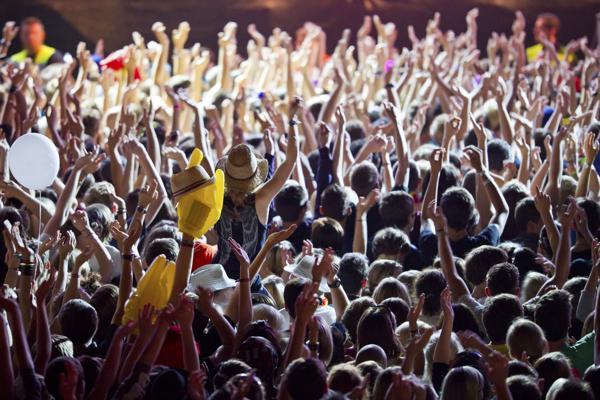 Where: Pilton, England
When: Last weekend in June
Why: Music lovers take heed, one of the biggest music festivals is here to enthrall you. What’s more, you get to stay in caravans and tents, while enjoying an open-air party. If that wasn’t enough, there are scores of after-parties that are sure to draw your attention. 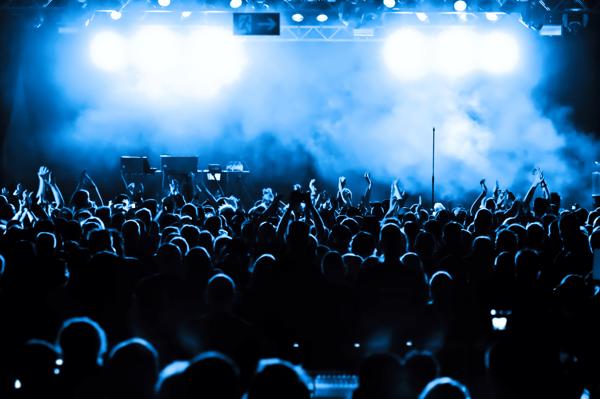 Where: Miami, Florida
When: Late March
Why: Lights – check, Sound – check, Fun – check, Outrageous dressing – check, Crowd – check. There, that about sums up the entire festival. Loud music and dancing are sure to send you into a different world. 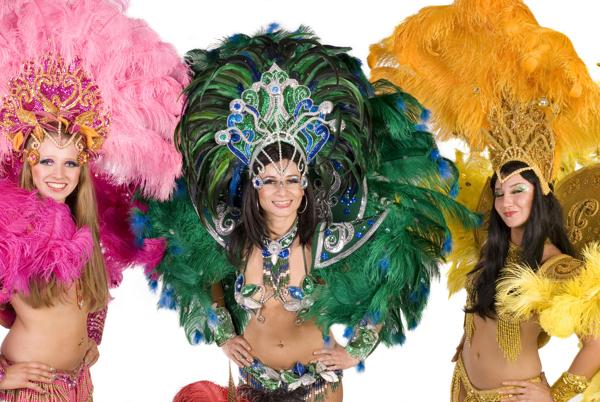 Where: Rio de Janeiro, Brazil
When: Weekend before Ash Wednesday
Why: Call it a storm after which the calm begins, the carnival is one big party for sure. There’s music, gaiety, color, dancing, and yes, lots of food. Nothing short of being flamboyant and full of vibrancy, we recommend experiencing this at least once in your life. 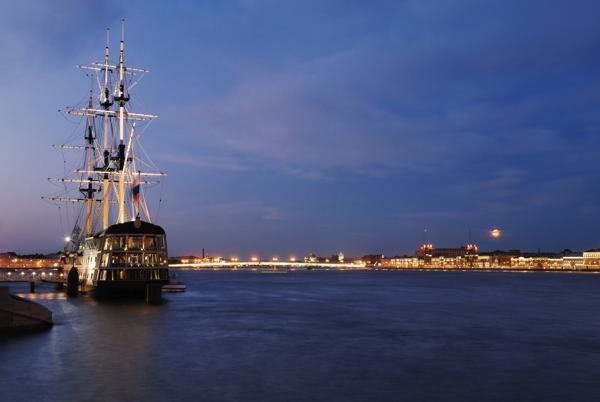 Where: St. Petersburg, Russia
When: June 13th – 15th
Why: Let your senses experience the emotions of ballet, touch the high octaves with the opera, and partake in the orchestras. Then there’s a series of carnivals that you can be a part of, including the largest period carnival that takes place at Peterhof. Amidst all the revelries, do not miss the closing ceremony, that is the mock pirate battle named “Scarlet Sails”.

Last but definitely not the least, the famous beer festival; 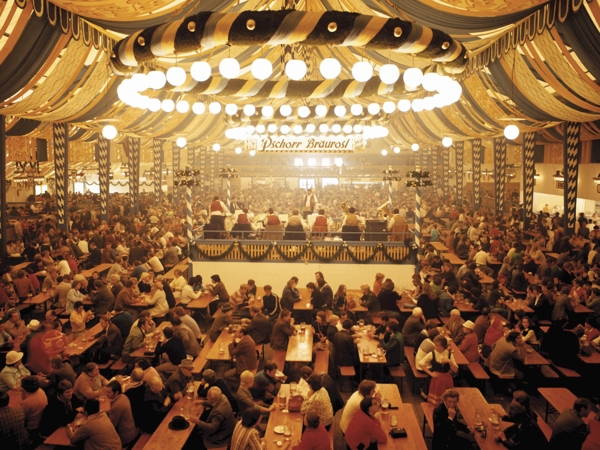 Where: Munich, Germany
When: Late September to early October
Why: 17 days of slurping down your favorite drink, there is also a wide variety of tasty and traditional food to gorge upon. Ah! that’s as close to paradise; don’t you agree?

If you talk of festivals alone, there are too many to be included in this limited list. However, very few are as bizarre and painful as the Entroida festival (celebrated in Spain and involves throwing dirt rags filled with fiery ants on people’s faces). Talking of which, there are quite a few festivals from this part of the world alone, that can be called quite insane. Spain, you rock!